Libya's parliament postponed a vote of confidence expected to be held on April 19 on a new UN-backed unity government even as it asserted its authority by assuming control of two ministries.

Deputies told AFP a special session of the internationally-recognised parliament, to be held in the eastern city of Tobruk, failed to take place because of "big differences".

One of Libya's rival governments resigned on April 5, a step that helps efforts by a new, U.N.-brokered unity government to assert itself in the capitol, Tripoli, despite opposition from some local militias.

Libya's National Salvation government in Tripoli has declared a state of emergency after reports that four members of the rival United Nations' unity government have arrived.

Libya's U.N.-backed Presidential Council called on the country's institutions March 12 to begin a transfer of authority to a unity government, and appealed to the international community to stop dealing with any rival powers.

"We voted against endorsing the government and ask... to be presented with another government," parliamentarian Ali al-Gaydi said.

A Libyan court has withdrawn the charges of smuggling of oil products brought last year against the crew of tanker vessel Sunoil, which included two Bulgarian nationals, the Foreign Ministry in Sofia announced on Friday.

The court in Tripoli has also ordered the release of the five members of the crew, which also included two Ukrainian citizens and one Romanian.

Libya's UN-brokered national unity government announced its formation on Jan. 19 under a disputed deal aimed at ending years of bloodshed. 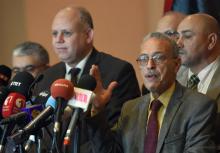 Warring Libyan factions meeting in Tunisia said on Dec. 6 they had reached an agreement to be approved by rival parliaments on ending the political deadlock that has plagued the country since Moamer Kadhafi's overthrow.