No government in Slovak history has faced challenges like those confronting the new administration led by Matovic and his anti-establishment OLANO party. Along with the deadly virus, it has the contagion of decades of corruption to content with.

"Milan Mazurek only said what nearly a whole nation thinks," said Fico, leader of the governing SMER-SD party. "If you execute someone for truth, you will turn him into a national hero. Should we be afraid to say that part of the Roma people abuse the social system?"

The most serious candidate is the head of Slovak diplomacy Miroslav Lajcak.
This is written by today's "Vecernje Novosti", which state that the EU's goal is to first and foremost mitigate US influence in the region.

For many Slovaks, the texts are a reminder of the sheer depth of corruption in a country still reeling from the shooting of 27-year-old Kuciak and his fiancée in Bratislava in February 2018.

They see the texts as proof that Kocner, who was already in custody when he was charged with ordering Kuciak's murder, thought he was above the law, though he denies any wrongdoing.

Slovakia's new government has won a confidence vote in parliament amid the political crisis sparked by the slayings of an investigative journalist and his fiancee, reported ABC News.

A meeting of the EU-Serbia inter-parliamentary committee will also be held then, Tanjug reported late on Tuesday.

Slovak president Andrej Kiska appointed Robert Fico as prime minister on March 23 after Fico's leftist Smer party won the largest share of the vote in a March 5 election and formed a four-party coalition. 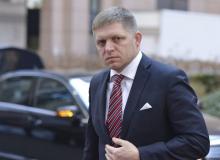 The social-democratic party of incumbent Slovak Prime Minister Robert Fico won the general elections held in the country on Saturday, but lost its parliamentary majority.

According to preliminary results based on almost all of the votes counted, Fico's Smer-Social Democracy party won the elections with 28.3 % of the ballots, which translates to 49 seats in the 150-member parliament. 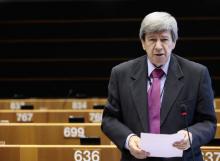 Eduard Kukan, former Slovak foreign minister and Member of the European Parliament, on Friday urged Albania's parties to respect the law and to fulfil promises to ban people with criminal backgrouns from holding or stand for office.