The best way to understand and commemorate Mustafa Kemal Atatürk, the founding leader of the modern Turkey, is by making Turkey one of the top countries in the world, President Recep Tayyip Erdoğan has said, citing his government's 17-year rule as the best example to it.

The Turkish army will not quit Syria before the troops of other countries leave the war-torn country, President Recep Tayyip Erdoğan has said, stressing that Turkey faces security risks as it has borders with this country.

Greek Foreign Minister Nikos Dendias will be meeting with his Turkish counterpart, Mevlut Cavusoglu, in Geneva on Friday, on the sidelines of a Western Balkans summit organized by the World Economic Forum. 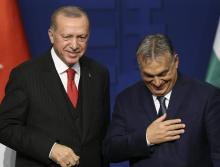 Turkish President Recep Tayyip Erdoğan criticized on Nov. 7 the European Union for its attitude toward Turkey, calling it "far from constructive".

Turkey will have to open the doors to Europe for Syrian refugees unless the European Union provides Ankara with enough support, President Tayyip Erdogan said on Thursday, adding that Turkey could not carry that burden alone.

Turkey's President Recep Tayyip Erdogan says the US is not fulfilling its promise to withdraw Kurdish armies from the 30-kilometres safe zone in northern Syria, Reuters reports.

Turkey has completed the infrastructure of financing model that will help low income groups and minimum-wage earners to buy homes at favorable terms, Treasury and Finance Minister Berat Albayrak has said. 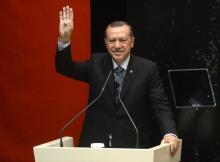 Turkish President Recep Tayyip Erdogan will visit the United States next week to meet with his US counterpart, Donald Trump, whom he spoke with on the phone today, France Press reported.

During a telephone conversation, the two officials confirmed they would meet in Washington on November 13 at the invitation of Trump, the Turkish presidency said in a statement.