SYRIZA took control of Greeces largest region, Attica, on Sunday but candidates backed by New Democracy were victorious in the majority of the 13 districts.

Leftist candidate Rena Dourou edged out Attica Governor Yiannis Sgouros by winning 50.83 percent in the closest result of the night. It is the first time that a left wing party has taken control of Attica.

With almost all the votes counted in the European Parliament elections, SYRIZA has a 3.8 percentage point lead over New Democracy but Prime Minister Antonis Samaras insists this is not enough to trigger early general elections.

SYRIZA gained the first electoral victory in its history on Sunday as it came first in the European Parliament vote but failed to establish a big enough gap over the coalition, for which PASOK performed better than expected, to suggest that the governments stability is in question.

The Piraeus Group is contemplating the idea of Geniki Banks full absorption, which would mean abandoning the plan for its subsidiary to take an autonomous course.

Sources have told Kathimerini that Piraeus officials have reviewed the groups strategy regarding Genikis future and that its absorption is currently the likeliest scenario. 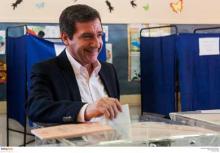 Athens Mayor Giorgos Kaminis appeared to have held on to his seat in local authority elections after his leftist challenger conceded defeat, although the race for Attica governor remained too close to call late on Sunday night while a number of independents beat government-backed candidates in other key seats.

Greeces anti-terrorism squad was investigating on Sunday an apparent attack at the headquarters of the co-ruling Socialist PASOK party after two bullets pierced its windows, police said.

Greeks began voting in a second round of local and European Parliament elections on Sunday, seen as a litmus test for support for Prime Minister Antonis Samarass shaky government.

Greeks vote today in the European Parliament elections and the second round of local polls.