Four space tourists safely ended their trailblazing trip to orbit on Sept. 18 with a splashdown in the Atlantic off the Florida coast.

Their SpaceX capsule parachuted into the ocean just before sunset, not far from where their chartered flight began three days earlier.

The all-amateur crew was the first to circle the world without a professional astronaut.

"We were left alone on an island. He [Elon Musk] made us work like slaves," Bülent Altan said in a book called "Lift-off," describing his early days in the company. 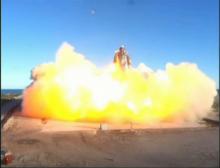 Entrepreneur Elon Musk has launched the latest prototype of his Starship vehicle from Texas.

Codenamed SN8, the unmanned rocket lifted away from the Boca Chica R&D facility on what had been billed as a brief flight to 12.5km.

The 50m-tall vehicle crashed on touchdown but Mr Musk was delighted with how much the test outing achieved.

SpaceX's Starship prototype exploded while attempting to land on Dec. 9 after an otherwise successful test launch from the company's rocket facility in Boca Chica, Texas, live video of the flight showed.

SpaceX's astronaut-riding Dragon capsule approached the International Space Station on May 31, just hours after a historic liftoff from Florida.

Two veteran NASA astronauts were headed for the International Space Station on May 30 after Elon Musk's SpaceX became the first commercial company to launch a rocket carrying humans into orbit, ushering in a new era in space travel.

SpaceX successfully launched its latest cluster of high-speed internet satellites into orbit on Feb. 17 but was unable to land its rocket booster on an autonomous ship, missing a key milestone.