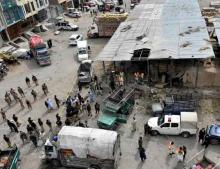 Six people were killed when a suicide bomber blew himself up in Kabul Monday, close to where scores of Afghans had been protesting against Taliban attacks on the minority Hazara ethnic group, reports AFP.

Argentine football star Lionel Messi has sent not one, but two jerseys to the five-year-old Afghan boy who became an Internet sensation last month when he was pictured wearing a plastic bag with "Messi" scrawled on it in marker pen.

Police in southwest Pakistan are investigating after a six-year-old girl was strangled and dumped near a garbage heap after apparently being subjected to rape attempts.

Sahar Batool, who was from the minority Hazara ethnic group, was found on Oct. 29 in Quetta, the capital of the restive southwestern province of Baluchistan.