The Earthwatch Institute named bees the most important living thing on the planet in its latest debate at the Royal Geographical Society in London in 2019.

The researchers also reminded that bees are already at risk of extinction. Recent studies show that about 90% of the world's bees are extinct. 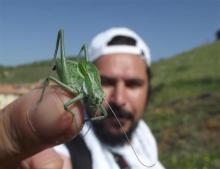 New insect species that started to appear lately in fields and agricultural lands and new invasive species might be seen in Turkey, an expert has warned.

Hasan Sevgili from Ordu University said that the invasion of desert grasshoppers, which has spread from Africa to the Turkish-Iraq-Iran border in recent years, may be a harbinger of climate change.

Somalia has declared a state of emergency due to the invasion of locusts in the Horn of Africa, France's press reported, citing a statement by the Somali Ministry of Agriculture.

Locusts destroy crops in one of the poorest and most vulnerable regions of the world.

Somalia is the first country in the region to declare an emergency over the infestation.

Turkey's local entrepreneur specialized in insect farming in the Mediterranean resort city of Antalya produces cockroaches to meet the live feed needs of carnivores in the country's domestic market.

We all know Aesop's fable about the ant and the grasshopper: The ant works hard in the withering heat all summer long, building his house and gathering supplies for winter. The grasshopper thinks the ant is a fool to work so hard while he sings the summer away. Come winter, the ant is warm and well fed in his home, while the grasshopper goes hungry and dies of cold.

Japanese giant hornets have killed some 12 million bees in the northern Turkish province of Tokat. Click through for the story in photos.

AFP - Scientists said Monday they had succeeded for the first time in wiping out an entire population of malaria-carrying mosquitos in the lab using a gene editing tool to programme their extinction.

Police in western Greece on Tuesday announced the seizure of more than 192 kilograms of hashish in two operations in the regions of Thesprotia and Aitoloacarnania.

The operation in Thesprotia on Monday evening led to the arrest of two Greek nationals - a man, 47, and a women, 46 - who were transporting 99 parcels of hashish weighing a total of 106.7 kg in their car.

Health authorities in Greece came under fire on Friday for their delayed response to the spread of the West Nile virus, which has claimed 17 lives so far.

AFP - Researchers have found a new way that global warming is bad for the planet: more hungry bugs.