According to the press service of the President of Serbia, he will be received by Pope Francis and will meet with the Vatican Secretary of State, Cardinal Pietro Parolin.
"I am going to the Vatican to meet the Pope and to beg them not to recognize Kosovo," Vucic told reporters in Belgrade recently.

Bucharest, June 1 /Agerpres/ - Thousands of believers from all over the country and abroad are waiting on Saturday for Pope Francis in Sumuleu Ciuc and Iasi, where the Sovereign Pontiff will be on the second day of his visit Romania. The Pope's visit began in Bucharest on Friday, and will end on Sunday at Blaj.

Prime Minister Boyko Borisov will send Pope Francis to Sofia Airport today (7 May), which marks the end of the apostolic journey of the Holy Father in Bulgaria.

From Sofia, the head of the Roman Catholic Church goes to Skopje. 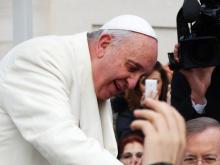 Pope Francis ministered on Tuesday to the thriving Catholic community in the United Arab Emirates as he concluded his historic visit to the Arabian Peninsula with the first-ever papal Mass here.

Pope Francis on Monday assailed the "insatiable greed" of today's consumerism, calling on people in his Christmas homily to make "sharing and giving" more a part of their live, reports AFP.

"Mankind became greedy and voracious," the leader of the world's 1.3 billion Catholics said in an address to thousands of followers in Saint Peter's Basilica in Rome.

Human remains have been discovered at a Rome property owned by the Vatican, the Holy See said Tuesday, in a potential breakthrough for police investigating one of Italy's darkest mysteries.

Pope Francis retired to spiritual seclusion outside the Vatican.

He will take part in the so-called "Spiritual Exercises" with Cardinals and other high-ranking members of the Roman Curia - the administrative apparatus of the Holy See.