Two members of a commission Pope Francis set up to study reforms, including a high-ranking Holy See official, have been arrested on suspicion of leaking confidential documents, the Vatican said on Nov. 2.

Pope Francis exhorted Cuba and the United States on Sept.19 to set an example for the world by deepening the recent rapprochement that he helped secretly broker between the former Cold War foes. 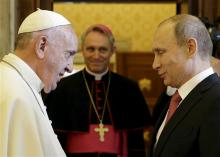 Pope Francis encouraged Russian President Vladimir Putin to engage in "sincere" international efforts aimed at bringing peace to Ukraine as the two men met privately at the Vatican on June 10. 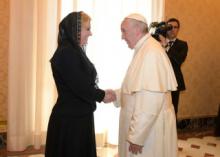 On a two-day visit to the Vatican, Croatian President Kolinda Grabar Kitarovic met Pope Francis on Thursday and asked him to visit her mainly Catholic country.

Bulgarian Prime Minister Boyko Borisov and a delegation headed by him were received at an audience by Pope Francis in the Vatican on Saturday.

The delegation is visiting the Vatican and Rome on Saturday and Sunday, on the occasion of May 24, when the Day of Bulgarian Education and Culture and Slavonic Script is celebrated.

President Klaus Iohannis will visit on Thursday the Universal Expo 2015 in Milan, and will be received the next day at the Vatican by Pope Francis, the Presidential Administration informs.

BELGRADE - Serbian President Tomislav Nikolic will pay a one-day official visit to the Vatican on Friday and convey to Pope Francis certain positions of the Serbian Orthodox Church (SPC) which are of mutual interest, the president's media relations office said in a release.

President to visit Vatican on April 17

BELGRADE -- President Tomislav Nikolic will pay an official one-day visit to Vatican on April 17, where he will confer with the pontiff of the Roman Catholic, Pope Francis.

BELGRADE - Serbian President Tomislav Nikolic will pay an official one-day visit to Vatican on April 17, where he will confer with supreme pontiff of the Roman Catholic Church Pope Francis.

President Nikolic and Pope Francis will discuss the topics of mutual importance to the two countries, including the situation in Kosovo-Metohija and current international issues.