Eighty-two illegal refugees who human traffickers had promised to transport to Romania have been rescued after being marooned on a small boat 24 miles off the coast of Istanbul. 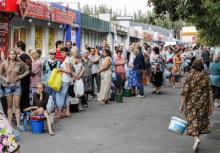 The number of people displaced inside Ukraine had more than doubled in the past four weeks due to the fighting in the country's East, the UN refugee agency said on Tuesday.

Nearly 2,000 people fleeing Africa and the Middle East have drowned in the Mediterranean this year, most of them in the past three months as they tried to reach Europe from Libya, the United Nations refugee agency said on Tuesday.

Bulgaria is grappling with an influx of refugees, mostly fleeing the war in Syria, that has caught authorities by surprise, Al Jazeera has said in a feature story.

Some 100 undocumented immigrants on Tuesday launched a hunger strike at a reception center in Paranesti, in the northern regional unit of Drama, demanding to be released after having been issued with documents suspending their deportation.

According to the Athens-Macedonian News Agency, the detainees were recently transferred to the center from the eastern Aegean island of Samos.

Police in the western port of Patra on Tuesday were seeking the perpetrators behind an arson attack on a small makeshift settlement close to a derelict paper factory where dozens of undocumented immigrants had been camping out.

A coast guard patrol on Wednesday rescued 41 undocumented migrants after they slashed the rubber dinghy they were sailing in while trying to reach the coast of Agathonisi, in the eastern Aegean.

Britain's prime minister announced new measures to cut immigration on Tuesday in a bid to lure voters from eurosceptic rivals 10 months from a general election.

"We are making changes to put the British people first," David Cameron wrote in an editorial in The Telegraph newspaper.

Another 56 undocumented immigrants detained on the island

Authorities in Greece say 77 migrants trying to enter the country illegally have been detained off the Aegean island of Mykonos.

The migrants  53 men, 12 women and 12 children  were picked up Friday by a coast guard vessel and transferred to the island's main port.

Nearly 80,000 migrants have taken dangerous boat journeys across the Mediterranean Sea to Europe in 2014, an increase of 60% compared to the entire 2013.