I (Almost) Got Away With It

A burglar died as he tried to flee from an apartment he attempted to rob with an accomplice in the district of Ambelokipi, central Athens, late Wednesday night.

According to police, the man, identified as a Georgian national, broke into an apartment on Valtou Street with an accomplice shortly after 11 p.m.

The incident happened in the city of Blenheim.

A Bulgarian man has died in New Zealand after being hit by a car, BTA reported. The accident happened on Friday night.

Cypriot police have recovered the stolen ashes of a Swedish teenager after a man who said he accidentally stole the urn they were in phoned the family in Sweden, offering a tearful apology and directions to the missing container, the late teen's mother said Monday.

"Our main goal is to capture that monster and bring him to justice. He will receive the appropriate punishment," added Biljana Popovic Ivkovic.
Popovic Ivkovic said that Jovanovic was armed and that those involved in the search were constantly working to catch him.

Residents of a suburb in Iraklio on the island of Crete woke up on Friday to the robbery of hay balls that decorated a Christmas manger that was set up by the local cultural center.

According to reports, the robbers took the hay to feed their livestock. 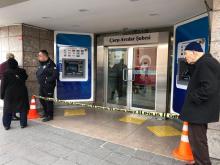 An armed robbery took place in a private bank in Avcılar district of Istanbul province.

The robbery occurred at 14:00 and police teams were dispatched to the scene.

A person who came to the bank as a customer pointed his gun at the bank officer and asked for the money.

The suspect, who took the money, fled the scene on foot, according to reports.

Police in Thessaloniki on Friday were investigating the burglary on Christmas Day of an elderly man's home in the district of Thermi during which the robbers allegedly made off with 800 gold sovereigns.

According to the account given by the 72-year-old, the assailants broke into his home through the balcony door and stole jewelry as well as the gold sovereigns.

A car driver lost control of his vehicle at the Athens district of Kolonos and crashed three parked cars before ending up inside a dry cleaners store in the early hours of Friday.

A man was injured in a pileup Friday caused by a car being pursued by members of the motorcycle-riding Dias police unit.
The driver of the car, which was carrying five robbery suspects, failed to comply when officers signaled for him to pull over on Koropi Avenue in northern Athens.

A baby believed to be only a few days old was found abandoned in a semi-buried waste container in the southwestern city of Kalamata on Wednesday morning, and a 25-year-old Georgian woman, believed to be its mother, was arrested a few hours later.