I (Almost) Got Away With It

Three people were killed and nine were injured in a shooting last night during a Halloween party at an apartment in Long Beach, California, Reuters reported, citing police and the fire department.

One of the suspects managed to escape, local police spokeswoman said. The victims are men between the ages of 20 and 30.

Greek police are searching for an armed man believed to have held up two supermarkets in the Athens districts of Patisia and Galatsi late Tuesday.

Two more people were arrested in connection with the found 39 bodies in a truck with Bulgarian registration in Essex, Nova TV reported quoting Sky News.

The arrested are a 38-year-old man and woman of the same age from Warrington. At the moment, there are three detainees. The driver of the truck, 25-year-old Mo Robinson, is also under arrest.

Police in the Greek capital arrested two suspects in the early hours of Friday after they allegedly robbed a jewelry store in Artemida, eastern Attica, by ramming a car through the window and grabbing any valuables they could get their hands on.

Police in Attica on Thursday announced the arrest of five suspected members of a robbery ring that is believed to have driven stolen cars through the front of shops, chiefly electronic goods retailers, before looting the premises and fleeing.
According to sources, the ring is believed to be behind a total of 40 robberies that netted it some 210,000 euros' worth of goods.

The 39 people who were found dead in a refrigerated truck near London are Chinese, according to Reuters and the BBC.

Police have already questioned the 25-year-old driver, who has been arrested and suspected of murder.

Law enforcement has searched two homes in Northern Ireland as part of the investigation, Reuters reports.

An armed man has been arrested after he ran down several people in a stolen ambulance in Oslo, Norway.

Norwegian police said they shot and wounded the man who reportedly stole an ambulance and hit several pedestrians as he drove away.
He was not critically injured after officers fired shots at the vehicle and was arrested at the scene.
Expect more details.

Greece's Supreme Court on Tuesday was hearing the appeal against extradition from a 37-year-old Iranian woman who fled to Greece last summer to allegedly escape her abusive husband.
The court's prosecutor called for her not to be extradited, saying her life is at risk.

Police in Thessaloniki launched a manhunt on Tuesday to locate a man who escaped from the city's court, where he awaited his hearing over multiple robbery convictions. 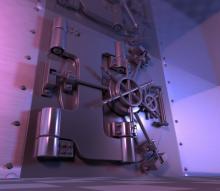 BGN 185,000 were stolen from an office of a bank located in a hypermarket on Europe's Blvd. in Sofia , BNR reported.

According to initial information, the money was stolen from a safe during on of the employees' breaks in the bank branch. The robbery was reported at 4.20pm yesterday.