The attack occurred on Thursday evening when about 200 people assembled at the election centre of the Municipality of Vau i Dejws, an opposition Democratic Party stronghold.

President Ilir Meta (left) and Prime Minister Edi Rama during a ceremony of remembrance for WWII heroes on May 5 2019. Photo: LSA

After the failure of the meeting requested by the President, Meta said he was setting a new date for the local elections, due on June 30.

"The move by the Dutch parliament is unprecedented, because as far as I know, previously has not been such a demand for the Western Balkans and our countries," he said.

Protesters threw a coloured substance against one of MPs as he was entering the parliament in Tirana for the first time.

After the opposition parties summoned their supporters early in the morning, dozens of them threw firecrackers and smoke bombs while police pushed them back. 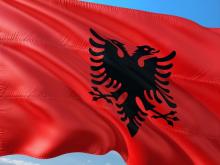 Thousands of Albanians went to the streets on Saturday to demand the resignation of Prime Minister Edi Rama.

Demonstrators clashed with the police as they tried to enter the prime minister's office in the capital Tirana.

Four demonstrators and two police officers were injured during the clash, according to the Albanian Ministry of Health and Social Protection. 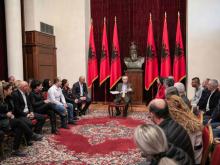 The rift between Albania's ruling Socialist Party and President Ilir Meta widened on Sunday after Prime Minister Edi Rama accused Meta of acting as the head of the opposition - after he urged the government to cancel a project to demolish homes to make way for a new stretch of road in the capital. 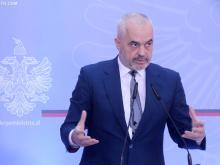 Albanian Prime Minister Edi Rama on Monday said he would take over the position of Minister for Europe and Foreign Affairs, following a row with President Ilir Meta on the nomination of Gent Cakaj as the new minister. 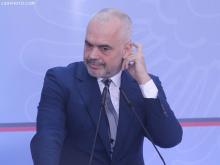 He also issued an apology to Kosovo "about this shame", as Cakaj has citizenship of both Kosovo and Albania.