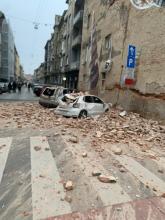 The epicenter of the earthquake was seven kilometers north of Zagreb at a depth of ten kilometers.
Index.hr first announced that an earthquake had killed a 15-year-old child. An ambulance took to the field but the child showed no signs of life. However, the latest information is that the child is alive and doctors are fighting for her life.

The author of the report is German journalist Grit Eggerickx, who arrived in Croatia through an exchange of journalists program to deal with environmental issues, but soon noticed that the very way HRT works, including its censorship, represents an interesting topic, Index.hr reports.

Gordan Duhacek, a journalist from Croatian website Index.hr, was fined around 100 euros at Zagreb's Misdemeanour Court on Monday for posted a Twitter message in July last year, which discussed police treatment of arrested people and contained the anti-police acronym 'ACAB' ('All Coppers are Bastards').

The website index.hr is citing a Belgrade newspaper to report that a Croatian delegation left the hall during a conference on antisemitism in Rome on Monday.

The Croatian media outlet is also citing the reaction of Croatian authorities, who denied the report.

An incident happened in Croatia's capital Zagreb on Thursday evening that left one person lightly injured, Croatian media are reporting.

The local police confirmed for the website index.hr that they received a report about the incident, which took place in a tram traveling on city line 6.

An incident happened in Croatia's capital Zagreb on Thursday evening that left one person lightly injured, Croatian media are reporting.

The local police confirmed for the website index.hr that they received a report about the incident, which took place in a tram traveling on city line 6.

A group of citizens of Croatia, Bosnia-Herzegovina, and Serbia caused a serious incident in a cafe in Vienna over the weekend.

The Croatian website index.hr is reporting this, citing the Germany-based Croatian magazine Feniks.

"The statue will be installed in the meadow on the corner of Grada Vukovara and Hrvatske Bratske Zajednice streets," Bandic announced, index.hr reported.

The police in Zagreb, Croatia's capital, have identified the persons who earlier this month attacked young water polo players from Serbia's Partizan club.

Among the assailants are two 24-year-olds and a minor, Croatia's index.hr website is reporting on Friday.

A policeman in Osijek, Croatia "threw a middle-aged woman onto the concrete and handcuffed her" for crossing the street against a red light.

This has been reported by the Croatian website index.hr, which noted the incident happened on Thursday morning, "and caused a good deal of attention among citizens."