Sofia. Newly appointed Minister of Interior Mladen Marinov promised continuity in the work of the ministry. "I think that by focusing on human resources and on technological upgrade we will achieve good results," he told reporters in Parliament after the voting, Focus News Agency reports.

Sofia. All institutions dealing with road safety will be consolidated into a single unit with control functions. This transpired from the words of Deputy Prime Minister Tomislav Donchev at a press briefing in the Council of Ministers after a meeting with Prime Minister Boyko Borissov, Focus News Agency reports.

ROME (Reuters) - Italy has refused to allow a commercial vessel flying an Italian flag to bring ashore rescued migrants, apparently keeping up a hardline policy on new arrivals as it presses European allies to share the burden of hosting an influx of displaced people.

Bulgaria is stable and perhaps the most secure place on the Balkans. The responsibilities and requirements of the people at the Ministry of Interior are great. This is what Interior Minister Valentin Radev said at the celebrations marking the 139th anniversary of the creation of the Interior Ministry.

Prime Minister Viorica Dancila has ordered the establishment of an e-Government steering committee under a decision published on Monday in the Official Journal.

A young family was found dead in their home in a block of flats in Plovdiv, the Ministry of Interior announced.

The bodies of Radi and Iliana Enevi were discovered after neighbors called the police about their child who had been crying all night long and their parents' voices were not heard. The signal was filed at 16:20 on Thursday at 112 Emergency. 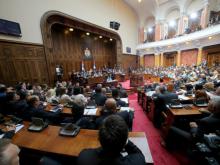 An agreement between Serbia's Interior Ministry and the Russian Security Service, which awaits adoption in the Serbian parliament, worries some MPs and experts, who fear its vagueness could cause problems.

Preparations for the next European Commission&#39;s evaluation mission under the Co-operation and Verification Mechanism (MCV) that reports on Romania&#39;s progress with judiciary reform and the fight against corruption were the objective of a meeting of the CVM board at the headquarters of the Justice Ministry (MJ).

The Ministry of Foreign Affairs (MFA) on Friday took over the chairmanship of the National Committee on International Humanitarian Law (CNDIU) from its predecessor at the committee&#39;s helm, the Ministry of Internal Affairs, the Foreign Ministry said in a release.

Secretary of State Dan Neculaescu will serve as CNDIU chairman.

A man about 60 years old was found dead in a parking lot at a restaurant on Tsar Boris III Obedinitel Blvd in Plovdiv.

This was announced by the spokesman of the Regional Directorate of the Ministry of Interior, FOCUS News Agency reported.

The signal for a helpless man is filed after 09.15. The on-arrival medical team found he was already dead.