International sanctions during the Ukrainian crisis

The European Union has imposed additional sanctions in Syria against eight people and two companies, the European Council announced on Monday.

The Council noted that eight "prominent" Syrian businessmen were added to the sanctions list as their "activities directly benefited the Assad regime, including through projects on land alienated by people displaced by the conflict ".

Cyprus is blocking new European Union sanctions against several officials from Russia-annexed Crimea in a bid to secure EU backing for tougher action against Turkey in a separate row over drilling for hydrocarbons, three diplomatic sources said.

Nicosia denied linking the two issues and said it needed time to review the proposed measures against the Crimean officials.

Germany accused the United States of interfering in its internal affairs on Dec. 21 for imposing sanctions on companies working on a major project to supply Western Europe with Russian gas.

In response to Turkey's repeated violations of Cyprus' exclusive economic zones (EEZ), European Union foreign ministers adopted a mechanism on Monday which would make it possible "to sanction individuals or entities responsible for, or involved in, unauthorized drilling activities of hydrocarbons."

The European Union has unveiled a system for imposing sanctions on Turkey over its unauthorized gas drilling in Mediterranean waters off Cyprus but no Turkish companies or officials have yet been targeted. 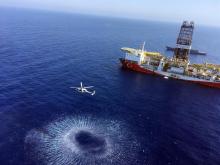 A first discussion will take place Wednesday in Brussels regarding a number of EU sanctions on Turkey following a call by Cyprus for EU solidarity after Turkish drilling activities off Cyprus.

The measures will likely be agreed Wednesday at a meeting of EU envoys and aproved by EU foreign ministers when they meet in Brussels next week.

A senior U.S. Republican senator on June 30 said sanctions would be "required under law" if Turkey "activates" the S-400 air defense systems bought from Russia, adding that he wanted to avoid a potential conflict with a NATO ally.

Iran called U.S. sanctions "economic war" on June 3, and said there could be no talks with the United States until sanctions are lifted, a day after Washington suggested it could hold talks without pre-conditions if Iran changed its behaviour.

81% of adult Bulgarians put national interests first and Bulgaria falls into the top ten countries in nationalist sentiment. This is the result of an international survey by Gallup International, conducted in 58 countries around the world.