A 27-year-old man was found dead in Istanbulâs Gezi Park on June 2, sparking speculation on Turkish social media two days after the eventful anniversary of the Gezi Park protests.

Passersby called the police when they noticed the man, identified as TuÄrul TunalÄ±, lying on the grass.

Taskim Square in Istanbul, Turkey's biggest cities, was virtually sealed off by 25 000 police preventing citizens from reaching the venue. Armored vehicles had been also deployed to safeguard a ban on gatherings this weekend imposed by the government.

The early morning prayers of several thousand of devout Muslims outside the Hagia Sophia Museum Saturday (May 31) sent multiple messages to everybody who is trying to decipher the complexity of present Turkish politics.

Prime Minister Recep Tayyip ErdoÄan has slammed the Gezi Park protesters on the eve of the anniversary of last year's massive demonstrations, while criticizing Twitter and Facebook on May 30.

The 42nd Istanbul Music Festival, organized by the Istanbul Foundation for Culture and Arts (Ä°KSV) under the sponsorship of Borusan Holding, will meet music lovers between May 31 and June 27. This yearâs festival will be held with the theme âThe Song of Nature.â

The water levels in Istanbulâs dams are lowest of the past decades with threatening the city with a water cuts in the summer. Waterworks minister calls on people to be careful using water at home Istanbul faces a drought and lack of tap water during the summer of 2014, as precipitation was not as high as previous years and only 27 percent of the dams in Istanbul are full.

Some 25,000 police officers and 50 water cannon trucks (TOMAs) have been assigned to prevent demonstrations marking the anniversary of the Gezi Park protests this weekend in Istanbul, with the cityâs governor warning that no gathering will be allowed in the Taksim area.

A Turkish man who was shot in the head on Thursday during a police crackdown on protesters, has died of his injuries, the Istanbul governor said.

"Unfortunately we have not been able to save Ugur Kurt," Huseyin Avni Mutlu wrote on Twitter, several hours after the 30-year-old victim was brought to hospital.

Police in Turkey have arrested 18 people in connection with last week's coal mine disaster in Soma.

The rescue operation at the mine ended on Saturday after the last two dead bodies were taken out. 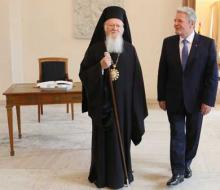 The highest spiritual leader of Orthodox Christians, Ecumenical Patriarch of Constantinople, Bartholomew I (l), is received by German President Joachim Gauck at Bellevue Palace in Berlin.