Today, the ambassadors of NATO member states are discussing this in Brussels.
"We regret the announcement by the US government that it intends to withdraw from the Open Skies Treaty, although we share concerns about Russia's implementation of the provisions of that agreement," reads the letter signed by the foreign ministers of ten NATO member states.

Turkey's president and the head of NATO on May 14 discussed via telephone the novel coronavirus and steps to take in the post-pandemic period, according to a statement by Ankara's presidential Directorate of Communications.

The adaptation to new realities should be a gift for policymakers. The Covid-19 pandemic cannot but have an impact on security calculations. NATO Secretary-General Jens Stoltenberg has said the Alliance needs to make sure that the health crisis does not become a security crisis. The Eastern Mediterranean is no exception. The new global reality causes uncertainty.

Greek Defense Minister Nikos Panagiotopoulos will on Wednesday take part in the NATO defense ministers teleconference to discuss the alliance's response to the Covid-19 crisis.

As well as ensuring the safety of allied troops and personnel, NATO is coordinating military support to allies in response to the pandemic. 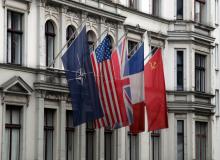 Hundreds of tonnes of healthcare equipment have been transported worldwide.

A Turkish military aircraft carrying medical aid for the fight against the novel coronavirus departed from the capital Ankara for five Balkan countries on April 8.

NATO's political dimension should be strengthened, and a group of 10 experts has been formed for this purpose, Turkey's foreign minister said on April 2.

Mevlüt Çavuşoğlu made the remarks after attending a NATO foreign ministers meeting, noting the group includes Turkey's Ambassador Tacan İldem, who has been working as NATO Assistant Secretary-General for Public Diplomacy.

The Turkish and Russian presidents on April 1 discussed over phone ways to combat the novel coronavirus, according to an official statement.