Israeli Prime Minister Benjamin Netanyahu sits on a chair during a visit to the National Archaeological Museum of Athens, escorted by Greek Prime Minister Kyriakos Mitsotakis (right) on Friday. Netanyahu cut short his visit to Greece Friday after the killing in Iraq of General Qassem Soleimani, the head of Iran's elite Quds Force.

If there's one thing Dora Beraha regrets in her twilight years, it is not passing on the 500-year-old language of Istanbul's Jews, Ladino, now on the point of extinction.
"After us, will there still be people who speak this language?" says 90-year-old Beraha.
"Surely, very few. It is possible that it will disappear."

The Ministry of Culture announced on Thursday there will be an extraordinary three-hour closure of the archaeological site of the Acropolis in Athens of Friday due to a visit by Israeli Prime Minister Benjamin Netanyahu. 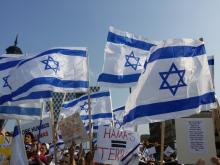 Former Israeli Prime Minister Benjamin Netanyahu has renounced his mandate, which was given to him by Israeli President Reuven Rivlin in order to form a new Israeli government, after the talks failed, BTA reported.

Netanyahu failed to garner the support of enough MPs to join his eventual governing coalition and returned the term to the president today, two days before the deadline.

Israel was set for crucial discussions on Sept. 22 on who should try to form the next government as last week's deadlocked election threatened Benjamin Netanyahu's long reign as prime minister.

Prime Minister Benjamin Netanyahu was in a battle for political survival after exit polls following Sept. 17's election showed the race too close to call and the Israeli leader's decade-long grip on power slipping.

Perhaps this is not a problem. Maybe we should just celebrate the opening of another Jewish museum in Hungary, which has the second-largest Jewish community in Europe but very few Holocaust memorial sites.

The couple's senior guests were greeted at the Kiev airport with bread and salt served by three girls in national costumes.