His words helped fuel rapid political and economic changes throughout post-communist Europe. Thirty years later, it is worth asking how well Kohl and other Western leaders kept this promise.

More than 60 bodies of people buried in a mass grave have been found by a Russian in his garden, Deutsche Welle reports.

The governments of Romania, Poland and the Baltic republics of Estonia, Latvia and Lithuania condemned "the crimes perpetrated under the ideology of Nazism and Stalinism" in a joint statement on Friday marking the 80th anniversary of the Nazi-Soviet pact that divided Europe into spheres of influence.

All official institutions in Moldova lowered the national flag on Friday in a mark of respect for the victims of the second and biggest wave of deportations from Soviet-occupied Bessarabia that Stalin ordered on the night between June 5-6, 1949.

Historian and former senior official of the SFR Yugoslavia Latinka Perovic said that the anniversary of the Informbiro Resolution is not talked about in Serbia today and that this is not at a coincidence at all primarily because of Russia's role in Serbia. 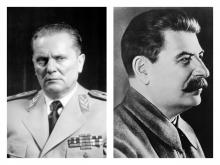 Academics and activists marked the 70th anniversary of the split between Yugoslav President Josip Broz Tito and Soviet leader Joseph Stalin, which led to mass persecution and the creation of the Non-Alignment Movement.

Greece could have become a communist country in 1947 and stayed that way until at least 1989, even though many believe that on October 9, 1944, at the Moscow Conference, Winston Churchill gave Joseph Stalin a napkin saying that Great Britain wanted 90 percent of Greece and we all - including the Americans - lived happily ever after.

Russian President Vladimir Putin is expected to attend ceremonies in the city formerly known as Stalingrad as it marks the 75th anniversary of one of the bloodiest battles in World War II.

The ceremonies in the city now known as Volgograd on February 2 will feature a parade with 75 tanks -- one for each year since the victory.

Two popular Russian journalists got into a fight during a radio broadcast, which was live on YouTube, BNT reported.

The swap of fists and came after a fierce debate over the role of Soviet dictator Joseph Stalin during the Second World War. The host tried to calm her guests, who had been insulting one another before the fight.

Russian President Vladimir Putin on Dec. 6 said he would seek a new six-year term in March elections, a move that would make him the longest-serving Russian leader since Joseph Stalin.