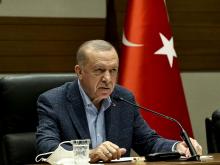 "Kılıçdaroğlu's threat to public officials, I put aside his political weirdness, is also clearly a crime," Erdoğan said at a press conference before departing for Angola on Oct. 17.

Nationalist Movement Party (MHP) leader Devlet Bahçeli on Oct. 12 accused the components of the Nation Alliance of "cheating" each other, although they had declared a consensus on the "strengthened parliamentary system." 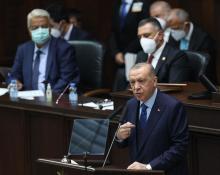 Turkey may embrace its first civilian constitution until the end of this legislative year should a consensus between all political parties agree on the draft, President Recep Tayyip Erdoğan has said, calling on the opposition alliance to work and prepare their own version of the charter.

Nationalist Movement Party (MHP) leader Devlet Bahçeli on Oct. 5 rejected any debate on the Kurdish issue and reiterated his argument that "there is no Kurdish problem" in Turkey.

There are no political and legal conditions for holding early polls, the parliament speaker has said, recalling that the government had changed the system into an executive-presidency model to avoid political instability in Turkey.

The Turkish Parliament will return from its summer recess on Oct. 1 with the opening speech by President Recep Tayyip Erdoğan and Parliament Speaker Mustafa Şentop.