Brdo pri Kranju – EU finance ministers on Saturday spoke in favour of a continuation of the bloc’s current investment cycle, amidst warnings that the soundness of public finances has to be borne in mind as stimulus spending is gradually wound down.

Ljubljana – The government expects that this year’s budget expenditure will be EUR 800 million higher than planned in the current budget documents. It says that the situation regarding Covid-19 had deteriorated significantly since the budgeting process was completed. 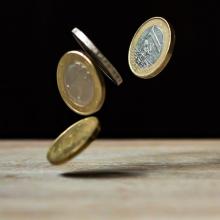 Ljubljana – The Fiscal Council has warned that the latest legislative stimulus package contains certain provisions that may worsen the structure of public finances, including the proposal for simplified retirement and one-off aid to population groups not directly affected by the coronavirus epidemic.

The figure was a $2.74-billion surplus in the same month last year, while it was down from $1.8 billion deficit previous month, the bank said.

It's the first time in history when fiscal and monetary policy work nearly perfectly, stated, on Monday evening, at private broadcaster B1TV, the Minister of Public Finance, Florin Citu, mentioning that the message given by the National Bank of Romania (BNR) is very important. "Besides the relaxed fiscal policy we now have another impulse.

Budget revenues in May will not look very good, so fiscal and monetary policies need to be relaxed even more, so that revenues in June are very good, the Minister of Public Finance Florin Citu said on Friday to the private TV broadcaster Digi 24. "In April, in the midst of an overlapping crisis, both economic and health, we managed to collect more to the budget than last year.

The deficit of the consolidated general budget for this year rises to 6.7pct of GDP at the first budget adjustment this year, given that the measures adopted to stimulate the economy represent 3pct of GDP, announced on Wednesday Finance Minister Florin Citu in a statement at the Victoria Palace. According to him, the cash deficit increases by 31.9 billion lei.

Turkey's current account balance posted a deficit of nearly $1.23 billion in February, according to official figures released on April 13.

The deficit was $117 million in the same period last year, said the Central Bank.

The government is considering ad hoc solutions to tackle the major issue of retroactive claims by millions of pensioners and civil servants.