At least fifteen people have been arrested over the robbery of Kim Kardashian in Paris last October.

The Algerian security guard of the Hôtel de Pourtalès Abdulrahman, spoke for the first time about the incident. 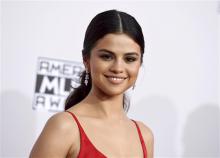 The photo-sharing site released its year-end data Dec. 1 showing the 24-year-old pop star has the most followers of any celebrity (103 million) and was responsible for nearly all of the most-liked celebrity posts in 2016.

Hot Russian model Irina Shayk shared an Instagram photo with her multitudes of fans striking a “Kim Kardahian” pose. Sexy Irina wanted to who her followers what her posterior looked like, so she snapped it standing in front of a mirror. Let’s be honest, the ‘real estate’ Irina’s behind covers in the photo is much less than that of Kardashian….

Niykee Heaton is a 21-year-old American singer/model, who became famous by uploading covers of hip-hop and pop hits on her youtube channel which went viral. The bombshell has been dubbed a mixture of Kim Kardashian with Rihanna due to her looks, with many online media saying she is the sexiest artist on the planet.

Angelina Jolie moved into a Malibu, California, rental after splitting from husband Brad Pitt last month, and now, she’s reportedly moved for a second time. According to a report on Tuesday, the 41-year-old actress recently moved her six children into a Hidden Hills home, which is owned by Denise Richards.

Kim Kardashian might have had the scare of her life after being robbed at gunpoint in Paris, but her ordeal did not seem to put off younger sister Kylie Jenner from posting a sexy photo on instagram.

The raid on Kim Kardashian’s apartment has all the hallmarks of the Pink Panthers, a gang of super-criminals who have got away with tens of millions of pounds in jewels in high-profile heists since 1984. The gang, whose members mostly hail from Serbia and Montenegro, have stolen more than 280 million pounds.

Kim Kardashian was robbed at gunpoint at a luxury residence in Paris by at least two men dressed as police officers, her publicist and police say.
A police spokesman said the haul from the robbery, mostly jewellery, was worth several million euros.
The robbery took place at about 03:00 local time (01:00 GMT).

We’ve seen all of the Keeping Up With The Kardashians star on more than one occasion, but this might be her most fashion ensemble to date. The 35-year-old beauty matched her outfit with lace-up black boots and a cross necklace and long khaki coat as she at least kept her arms warm, at a night out in Paris.

Serial celebrity accoster  has struck again, this time at Paris Fashion Week, targeting Kim Kardashian’s posterior as she was entering an exclusive restaurant in the french capital on Wednesday.