The Belgrade-funded parallel health system run by the Serbian minority in Kosovo is sending its COVID-19 test results to Serbia - with very little or no collaboration with Kosovo's own institutions.

Not only tests for COVID-19 in Serb-run municipalities in Kosovo but also the subsequent treatment of severe cases is taking place in Serbia.

Milena Ivanovic Popovic, the widow of murdered Kosovo Serb political party leader Oliver Ivanovic, was proposed on Wednesday as a witness in a defamation case launched by businessman Milan Radoicic, who has been accused of leading a criminal organisation that killed Ivanovic. 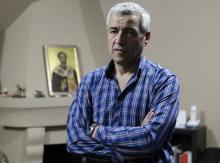 The association states that "NATO, KFOR and EULEX are aware of this truth".
The trial for the murder of Oliver Ivanovic will be a farce, the real criminals will never be convicted, but the trial will take months and years for two purposes, the association said in a statement.

Kosovo's Special Prosecution filed an indictment on Thursday accusing Goran Stanisic of committing war crimes against Kosovo Albanian civilians while he was a Serbian reservist policeman in 1999.

A memorial service will be held at 8.15 am, because at that exact time two years ago, Oliver Ivanovic was killed in Kosovska Mitrovica.

Two years after Serb politician Oliver Ivanovic was gunned down outside his party's office in the ethnically-divided Kosovo town of Mitrovica on January 16, 2018, six people are to be tried for their alleged involvement in his killing.

But in the recent past, Prizren has not always been such a problem-free place for Serbs. Out of a pre-war population of around 10,000 Serbs, Jevtic is one of only about 20 who returned after the conflict to live in the city today.

The Director of Serbia's Office for Kosovo, Marko Djuric, on Thursday denounced the arson attack on the car of Srpska Lista presidency member Slavko Simic in northern Kosovo in the early hours of the day.