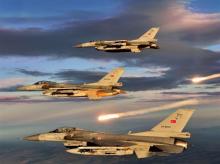 The terrorists were neutralized in the Metina region in an air strike, the ministry said on Twitter, adding that operations would continue.

Turkish authorities often use the term "neutralized" to imply the terrorists in question surrendered or were killed or captured.

Turkish prosecutors sought an aggravated life sentence on March 26 for a suspect accused in the 2015 killing of Tahir Elçi, the former head of the Diyarbakır Bar Association, and two police officers.

"Six PKK/YPG terrorists who were attempting to infiltrate the Operation Peace Spring zone were successfully neutralized in successful operations of our heroic command," the ministry said on Twitter.

It added that the operations will continue uninterrupted.

Five mayors from the Peoples' Democratic Party (HDP) in southeastern Turkey have been detained over alleged terror links, according to local media reports.

Turkey appointed acting mayors to four municipalities in the region.

The counter-terrorism operations will continue without any let-up, the Defense Ministry said in a tweet.

At least three YPG/PKK terrorists have surrendered to security forces, the Defense Ministry said on March 19.

The ministry said on Twitter that two terrorists, who fled the terror ranks in northern Iraq, turned themselves in at southeastern Şırnak province's border post.

"Our heroic commandos neutralized two separatist YPG/PKK terrorists trying to infiltrate into the area of the Operation Euphrates Shield region," the ministry said in a tweet.