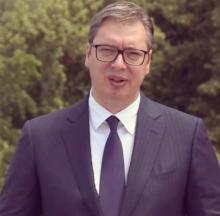 Vui said that pressures on Serbia on the issue of Kosovo and Metohija were expected, as well as that the decision of the Montenegrin parliament would still be discussed and that Serbia would always stand up for the interests of its people in Montenegro.

Moldova's Intelligence and Security Service, SIS, has denied any involvement in the forced rendition to Ukraine in early April of a Ukrainian judge, Mykola Chaus, who had fled to Moldova.

Chaus had been hiding from Ukrainian prosecutors in the Moldovan capital, Chisinau, since 2007. The Kyiv authorities had repeatedly insisted on his extradition.

Russian deputies have condemned the joint decision of Moldova and Ukraine to compel all vehicles in the breakaway Moldovan region of Transnistria to re-register with "neutral" platers if they want to cross into Ukraine through the Cuciurgan customs point from September 1, 2021.

The last round of the ten-year dialogue between Belgrade and Pristina this time ended in less than two hours. The unwritten rule of Brussels diplomacy was confirmed that the longer a meeting lasts, the greater the possibility for a positive outcome.

According to the media, this was confirmed by the President of the Assembly of Serbia, Ivica Dai.
"Novosti" reminds that during his recent address to the public, Vui announced that he would inform the parliamentarians about all the details of the dialogue with the Kosovo Albanians, and that he would submit a report to the Assembly.

US Special Envoy for the Western Balkans Matthew Palmer adds that he believes that there are much more productive areas for discussion at this moment that need to be addressed.
Such as, for example, missing persons, an area around which both parties can reach an agreement.

Half an hour later, Special Envoy of the State Department for the Western Balkans, Matthew Palmer joined the meeting in the residence of the President of Republic of Serbia.

The Azerbaijani president said on May 30 that a part of the Zangezur corridor that will connect his country with Turkey should pass through Armenia.

Speaking to Turkey's Transport and Infrastructure Minister Adil Karaismailoğlu in Baku, Ilham Aliyev said the opening of the corridor will further strengthen relations between Turkic nations.

As Vui says, Kurti talks all the time about Kosovo's cultural heritage and Kosovo's heritage, not Serbian.
Vui said that on the occasion of the letter that Kurti addressed to the abbot of the monastery Visoki Decani, father Sava Janji, in which he presented him with "the commitment of the Kosovo government in the protection of the Kosovo heritage of all communities in Kosovo".