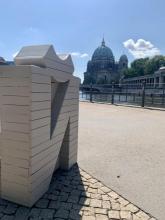 This summer, residents and visitors of Berlin will be welcomed by an open-air art installation from Bulgarian letters in one of the most visited places on the banks of the River Spree, near Berlin Cathedral and Museum Island.

A Spanish archaeologist whose staggering discoveries included one of the earliest representations of the crucifixion and proof that the written Basque language was centuries older than previously thought has been found guilty of faking the finds.

The saga began in June 2006 when Eliseo Gil presented artefacts excavated from the Roman town of Veleia, near the Basque city of Vitoria. 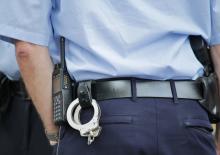 Three police officers of Bulgarian origin were injured during the riots in the United States. This was announced by the Bulgarian-American Police Association.

"According to unofficial data, we have three injured colleagues who are recovering and have no lasting results from the injuries. As far as I know, each of them is returning to work, "Officer Blagovest Bonev told NOVA TV.

European Union Industry Commissioner Thierry Breton said on Friday the EU was heading this year towards a 5-10 percent economic contraction due to the new coronavirus outbreak.

Personalities representing the diplomatic and cultural life of the Spanish speaking countries in Bucharest, alongside the Spanish writer Care Santos, will read from the work of Miguel de Cervantes and several other great Spanish authors to the Romanian audience, on the International Book Day, informs a press release of the Cervantes Institute sent to AGERPRES.

The European Union's industry chief Thierry Breton said on Tuesday he wanted all EU member states to have the same access to financing and credit.

Breton also told French BFM TV he expected the Schengen zone to stay closed over the summer due to the new coronavirus.

Balkan Investigative Reporting Network is currently mapping the challenges that journalists and media workers face due to the COVID-19 outbreak in the countries of Central and Southeastern Europe.

Turkey is preparing an initiative for cooperation between the Turkish and Bulgarian police in order to secure the common borders more effectively, Aksam newspaper said. Common border patrols for border protection can be formed, the newspaper added. Turkey has negotiated such an initiative with Serbia. 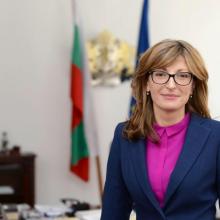 They have expressed a desire to be removed from the city

If there's one thing Dora Beraha regrets in her twilight years, it is not passing on the 500-year-old language of Istanbul's Jews, Ladino, now on the point of extinction.
"After us, will there still be people who speak this language?" says 90-year-old Beraha.
"Surely, very few. It is possible that it will disappear."