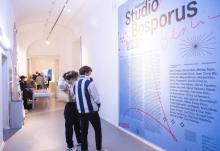 This year, Berlin hosts an exclusive exhibition for the commemoration of the 60th anniversary for celebrating the Germany and Turkey dialogue.

German Bundestag Vice President Claudia Roth said yesterday that she was visiting Kragujevac, which marks the 80th anniversary of the German occupation forces killing thousands of civilians, with a message that something like this would never happen again and that she would emphasize the importance of shared memory.

A no-confidence vote in the Romanian parliament overthrew the government of Prime Minister Florin Katsu, which took power in December 2020. The decision of the Social Democratic Party was supported by 281 MPs. The crisis in Romania began in September, when the coalition partner of the National Liberals - the USR-PLUS Alliance, stepped down from government.

Pope Francis and other religious leaders issued a joint appeal today to the organizers and participants of next month's UN Climate Change Conference (COP26). They called on forum participants to propose concrete solutions to save the planet from "an unprecedented environmental crisis," Reuters reported.

Eighteen candidates of Turkish descent have been elected as lawmakers in Germany's federal parliament, Bundestag, in the country's elections that took place on Sept. 26.

The SDP receives 25.7 percent of the vote, its best result in years.

The Moldovan government and its British counterpart agreed on Tuesday that illicit funds confiscated by the British courts from Luca Filat, the son of former Moldovan Prime Minister Vlad Filat, will be returned to Moldova.