Libyan Prime Minister Fayez al-Sarraj reiterated on Feb. 15 that the Libyan problem could be solved through negotiations.

Eastern Libya forces will not allow the United Nations to use the only functioning airport in the capital Tripoli, a spokesman for the group that has been trying to capture the city from the internationally recognized government said on Feb. 12. 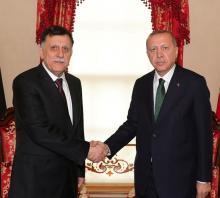 The closed-door meeting between Erdoğan and Fayez al-Sarraj is underway at the Dolmabahçe Palace.

Turkey has urged U.N. Secretary-General Antonio Guterres to be more active in Libya by boosting efforts for a political solution and cease-fire, Foreign Minister Mevlüt Çavuşoğlu has revealed, reiterating that the continued deadly offensive by General Khalifa Haftar's forces risks deeper chaos and further disintegration in the country.

Turkey has slammed an attack by General Khalifa Haftar forces against a military academy in Tripoli, which claimed the lives of at least 30 academy students, and renewed its calls on the cessation of foreign military support to Haftar. 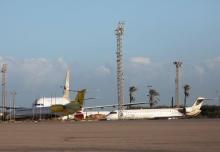 The head of the U.N. on Jan. 4 urged an "immediate ceasefire" in war-weary Libya where the internationally recognized Government of National Accord (GNA) fights forces affiliated with Gen. Khalifa Haftar.

In April, Haftar's forces launched a military campaign to capture Tripoli from the internationally recognized government.

Libya's UN-recognized government on Dec. 27 bombarded forces and mercenaries loyal to military commander Khalifa Haftar, according to the media office of the Burkan Al-Ghadab (Volcano of Rage) operation.

Government of National Accord (GNA) forces shelled an armory belonging to Haftar's forces in Yarmouk district south of Tripoli. 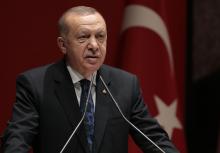 The Turkish government will submit a parliamentary motion for the deployment of troops to Libya after a demand by the U.N.-backed government in Tripoli, President Recep Tayyip Erdoğan has said, signaling that the necessary approval would be obtained from the Turkish Parliament before mid-January.