Prime Minister Aleksandar Vucic was questioned on Sunday at his own request and passed a polygraph test, Nebojsa Stefanovic has announced.

The interior minister also told a news conference in Belgrade that "new proof has emerged that the whole scandal surrounding prime minister was fake and rigged."

Šarić claims he received money from Mišković and Čume

BELGRADE: Darko Šarić (44), accused of cocaine smuggling and money laundering, was interrogated by the police yesterday, after he had taken a lie detector test.

BELGRADE -- After it was announced that UKP chief Rodoljub Milović had passed his lie detector test, reports said that Darko Šarić also wants to take one. 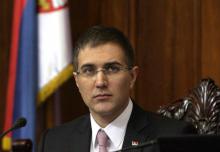 Stefanović added that he had formed a working group to investigate all allegations that Darko Šarić presented as part of his defense.

BELGRADE - Head of the Criminal Police Directorate Rodoljub Milovic underwent polygraph testing on Wednesday concerning the allegations made against him by Darko Saric, defendant in a high-profile drug trafficking case.