A station manager of the Athens metro was beaten up by two men who refused to wear their mask on the train, the public company responsible for managing the metro, tram and electric railway, Urban Rail Transport (STASY), said on Wednesday.

Public transport in Athens will move at a slower pace on Thursday night due to the New Year's Eve holiday.

Lines 2 and 3 of the Athens metro will increase the frequency of service as of Tuesday, following a rise in commuter traffic since lockdown measures started being eased last month.

Firemen rescued a woman who had fallen onto the tracks of the Athens metro on Monday morning.

The woman reportedly fell at the Syngrou-Fix metro station during rush hour, according to the ANA-MPA news agency, which did not provide additional details.

Service on the Athens metro was thrown into chaos on Monday morning amid reports that a person had fallen onto the tracks on Line 2 (red), connecting Anthoupoli to Elliniko.

The operator of the Athens metro has said that it shut down the station at Panepistimio in the city center following a suicide.

Initial reports said a man threw himself onto the tracks in front of an incoming train.

Line 2 of the metro will run from Anthoupoli to Metaxourgio and from Syntagma to Elliniko until the station is reopened.

A suspected bomb blast inside a car of the St. Petersburg Metro system has resulted in casualties among passengers. The entire transit system is shut down as bomb squads and rescuers respond to the emergency. 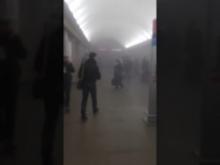 An explosion has hit an underground station in the city of St Petersburg, Russian media report.

At least 10 people are believed to have died after two explosions on the Saint Petersburg subway.

The Tass and Interfax agencies reported a blast at the Sennaya Ploshchad metro station, which left a number of victims.

At least nine people were killed and 20 injured when an explosion tore through a train carriage in the St. Petersburg metro system on April 3, the Russian National Anti-Terrorist Committee said, according to Reuters.

Interfax news agency quoted an unnamed source as saying the blast, which occurred when the train was between two stations, was caused by a bomb filled with shrapnel.

At least 10 people were killed in explosions in two train carriages at metro stations in St. Petersburg on April 3, Russian authorities said.