Ahead of the Colosseum and Pompeii, the towering Greek temple complex at Paestum near Naples is the first Italian archaeological site to reopen to tourists after the coronavirus pandemic lockdown.

The Metropolitan Museum of Art in New York said on May 19 it hopes to reopen in mid-August or a few weeks later with reduced visiting hours and no guided tours so as to encourage social distancing.

Hundreds of thousands of high school seniors in South Korea had their temperature checked and rubbed their hands with sanitizer as they returned to school on May 20, many for the first time since late last year after their new term was repeatedly pushed back by the coronavirus pandemic.

Passengers board a ferry at Piraeus on Monday when connections to Crete resumed as part of the continued easing of lockdown measures. Travel to other islands is expected to resume over the coming weeks. [Alexandros Beltes/ANA-MPA]

An exhibition commemorating the 500th anniversary of the death of Renaissance artist Raphael will reopen on June 2 in Rome and its run extended until Aug. 30, after it fell foul of the COVID-19 lockdown.

Greek soccer is probably returning to action early next month, as the Super League announced on Monday decided to propose to the Greek government that its playoffs start on June 6-7. 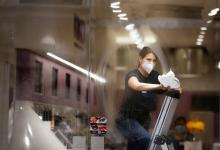 Restaurants and churches will reopen in Italy on May 18 as part of a fresh wave of lockdown easing in Europe, but rising coronavirus death tolls in Brazil, South Africa and other parts of the world showed the worst is still to come in many countries.

Greeks flocked to the seaside on Saturday when more than 500 beaches reopened, as the country sought to walk the fine line between protecting people from Covid-19 while reviving the tourism sector that many depend on for their livelihoods.

The Hellenic Police (ELAS) on Wednesday recorded 18 instances in which citizens had not been wearing a mask in an enclosed public space, a police statement said on Thursday.

Of those violations, four were in Western Greece, three on Crete and two in Attica. Since the government began easing the lockdown on May 4, 304 such violations have been recorded nationwide.

The high demand for home repairs during the spring lockdown in Greece will likely give Douleutaras, an online platform for finding technicians, its first year of profit in 2020 since it was founded in 2015, according to chief executive Andreas Grammatis.