The former Croatian tennis player has been the coach of Novak Djokovic for almost a year.
He says the collaboration is phenomenal.

The living tennis legend - Roger Federer, who is still going strong on the courts, has hinted that he is already considering giving up his active career. He is confident he will play until Wimbledon next year, but he is not sure about it afterwards.

"Inside myself, I decided that I want to play until Wimbledon," Federer said, before adding:

Grigor Dimitrov's victory over Roger Federer in the US open quarterfinal clash with a 0-7 record against 19-time major champion had surprised many, maybe himself as well, as nothing indicated something like that could have happened. 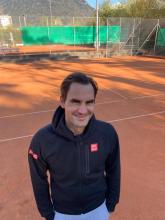 The duel between the two is the second of the US Open 2019 night session.

Roger Federer has shared his expectations for the upcoming quarterfinal against Grigor Dimitrov at the US Open, Gong.bg reports. In practice, the duel between the two is the second of the night session of the US Open 2019, with the meeting beginning after 3:00 Bulgarian time.

World number seven Stefanos Tsitsipas is set to make his debut at the Laver Cup in Geneva in September for Team Europe while Australia's Nick Kyrgios was also named in Team World, the organizers said on Tuesday.

For nearly five tight, tense and terrific hours, Novak Djokovic and Roger Federer traded the lead, playing on and on and on until an unprecedented fifth-set tiebreaker was required to settle their memorable Wimbledon final.

Roger Federer claimed the 100th ATP title of his career by beating 20-year-old Greek Stefanos Tsitsipas 6-4 6-4 in the final of the Dubai Duty Free Tennis Championships on Saturday.
The 20-times Grand Slam champion became the second man in the Open Era to claim 100 titles after American Jimmy Connors who won 109.

Stefanos Tsitsipas reached the final of the Dubai Championships by beating Gael Monfils 4-6, 7-6 (4), 7-6 (4) on Friday, keeping the rising star from Greece on course for back-to-back ATP titles.
Roger Federer, who is looking to win his 100th career title, meets Borna Coric in the second semifinal later.

Roger Federer relied on his trusted serve to beat Stefanos Tsitsipas 7-6 (5), 7-6 (4) Thursday and give defending champion Switzerland a spot in the Hopman Cup final.

Unbeaten Switzerland assured its place in Saturday's final ahead of the women's singles match between Belinda Bencic and Greek opponent Maria Sakkari.