An elephant in Kenya has given birth to twins, an extremely rare event, conservationists said on Jan. 20.

Conservation group Save the Elephants said the twins -- one male and one female -- were born to a mother named Bora.

They were first spotted by lucky tourist guides on a safari drive at the weekend in Samburu reserve in northern Kenya. 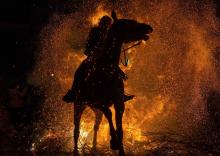 At full gallop, the horse emerges from the darkness and races through a string of bonfires in an ancient ritual to ward off sickness performed every January in a tiny Spanish village.

Known as Luminarias, the festival takes place every Jan. 16 in San Bartolome de Pinares, a village perched high in the hills about 100 kilometers (60 miles) west of Madrid.

In Australia, the number of kangaroos living there is twice that of humans 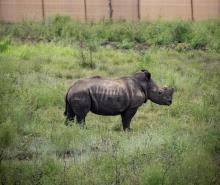 Thirty endangered white rhinos arrived in Rwanda on Nov. 29 after a long journey from South Africa in a Boeing 747, conservationists said, hailing it as the largest single transfer of the species ever undertaken.

A polar bear chases a reindeer into the water, drags it ashore and devours it, in a striking scene caught on film for the first time.

With sea ice melting, the king of the Arctic may be changing its diet. 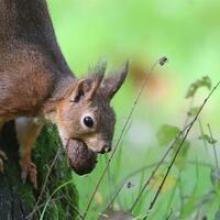 Tokyo-based Ferry Corporation has decided to increase productivity and reduce stress for its employees in an unusual way - it has sheltered nine stray cats in its offices, World Of Buzz reported. 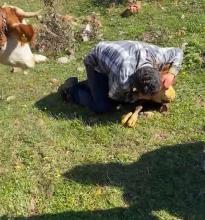 A shepherd in the Black Sea province of Tokat has saved the life of a newborn calf that was unable to breathe after being born by administering CPR, giving it the kiss of life.
According to footage taken by a mobile phone and uploaded on social media, one of the cows of Şahbaz Gül, a shepherd living in the Kapıcı village of the Almus district, gave birth to a calf.

Archaeological teams in Turkey continue excavations in the Çayönü mound, a Neolithic settlement where traces of settled life and production are observed.

The excavations in Çayönü, in the southeastern Diyarbakır province, began in 1964, but they were halted in 1991 due to security reasons. The work has resumed in 2017 with a team led by Aslı Erim Özdoğan.