Europe's mainstream political parties took a hit in elections on May 26 but held off a strong surge by the populist right of Marine Le Pen, Matteo Salvini and Nigel Farage.

European Parliament elections not only determine the make-up of the next EU assembly and help decide who ends up running top European institutions but can also play back into the national politics of the bloc's 28 member states.
Here is a run-down of some of those national stakes after polls closed on Sunday and exit polls and early results came in: 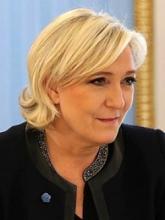 She is part of a 20-member delegation - all leaders in Europe and MEPs from more than 5 countries.

It concerns a ceremony held last Sunday, seen by many in Serbia as scandalous, because of the manner in which the representatives of the country - a victor in WW1 that suffered massive military and civilian sacrifices fighting on the side of the allies - has been treated in Paris.

French Prime Minister Marine Le Pen will be on a working visit in Sofia on November 16 to meet nationalist and populist allies from Eastern Europe in connection with the forthcoming elections to the European Parliament next May.

Le Pen shared the gruesome images in December 2015, a few weeks after IS jihadists killed 130 people in attacks in Paris, sparking widespread condemnation in France.

Many still believe that the tsunami of populism and nationalism which swept across Europe a few years ago left it largely untouched. Their optimism was sadly misplaced.

French far-right leader Marine Le Pen, who has been largely out of the spotlight since stinging electoral defeats, on Saturday sought to reclaim the mantle of main opponent to President Emmanuel Macron, which polls now attribute to the far-left, reported Reuters.

Marine Le Pen should step down as leader of France's far-right National Front (FN) after disappointing results in the presidential and parliamentary elections, her father who founded the anti-establishment party said on June 20.

French President Emmanuel Macron's centrist party swept to a large majority in parliamentary elections on June 18, although it fell short of a predicted landslide.