Romania's Chief of the Defence Staff (SMA), General Nicolae-Ionel Ciuca on Thursday met Commandant of the United States Marine Corps David H. Berger, according to a press statement released by SMA on Friday. According to SMA, the meeting, which took place at the Washington Command, also x-rayed the security context in the Black Sea region.

Chief of the Naval Forces General Staff (SMFN), Vice Admiral Alexandru Mirsu, on Saturday, decorated the 307th Marine Battalion with the Naval Forces Emblem of Honor in appreciation for the manner in which they performed their missions.

A number of 300 Romanian and foreign servicemen are participating in the "Platinum Eagle 19.1" multinational exercise, a release of the National Defence Ministry (MApN) sent to AGERPRES informs.

Ministry of Defense sources say that about 300 US Marines have arrived in Volos to take part in a joint exercise with their Greek counterparts.

Marines from the US' 22 Marine Expeditionary Unit will join Greece's 32nd Marine Brigade in the "Alexander the Great" joint exercise.

Rescue operations were underway Thursday for five US marines missing after two American military aircraft crashed during a refuelling operation off the coast of Japan, the Japanese defence minister said, reports AFP.

One crew member has already been rescued and is thought to be in a stable condition, Takeshi Iwaya told reporters.

The U.S. Marine Corps' Black Sea Rotational Force left its base in Romania for training in Bulgaria this month, carrying out exercises that are another sign the U.S. military is preparing for a kind of conflict that's different from what it has faced in recent decades.

Fifteen US Marines were injured, five of them critically after their attacking amphibious car ignited during a training, the France press reported, quoted by Focus.

The Australian government said on Aug. 6 that it would deploy its armed forces to assist in recovery efforts after the U.S. Marine Corps suspended a search for three Marines missing since their aircraft crashed off Australia's northeast coast a day earlier. 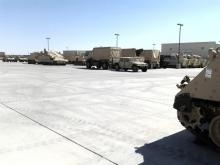 If you want to see American combat machines up close, go to the Military Academy "Georgi S. Rakovski" in Sofia, on Thursday July 27th. Between 11 a.m. and 1 p.m. you may see an exhibition of military equipment, which is used both in Bulgaria and the U.S, according to the Ministry of Defense.

Marines from the United States and Ukraine carried out a coordinated amphibious assault drill during exercise Sea Breeze in the Ukrainian town of Mykolaivka, the US European Command (EUCOM) said in a release on Wednesday.