The Beyoğlu Cultural Road Festival will be held between Oct. 29 and Nov. 14. At a recent meeting held at Galataport, Culture and Tourism Minister Mehmet Nuri Ersoy has said that the festival will be held twice a year in the spring and the fall seasons.

Works that have been continuing in the ancient city of Alexandria Troas, located in a region close to the sea in the northwestern province of Çanakkale's Ezine district, have brought to light two gates of the city's bazaar, believed to be 2,200 years old.

A new report shows that the average rent increase in Istanbul has been lingering around 60 percent, while the difference reached 90 percent in some districts, especially in neighborhoods along the Bosphorus Strait and areas with mass housing.

A 250-year-old inn, located in the Galata neighborhood of Istanbul's Beyoğlu district, which once hosted the headquarter of the Ottoman Bank, will be restored due to a protocol signed between the metropolitan municipality and the Bahçeşehir Uğur Education Foundation.

The St. Pierre Inn will be converted into a cultural and arts center after the restoration.

The upper layers of the waters of Marmara Sea are getting warmer due to global warming and pollution, an expert has warned.

Speaking at an organization in the northwestern province of Edirne, hydro-biologist Mehmet Levent Artüz stressed the dangers the Marmara Sea will face in the near future in a presentation named "The Climate Crisis and the Seas." 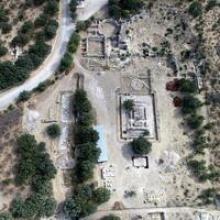 The coastal map of Istanbul will change and most of the places along the Bosphorus Strait will be underwater in around four decades, according to a report by a U.S.-based climate organization.

"Seawater will move in around 2 kilometers to the districts located by the Bosphorus," Climate Central said.

History is being rewritten with archaeological excavations at Haydarpaşa Train Station in Istanbul's Kadıköy district, which was known as Chalcedon (the Land of the Blind) in ancient times.

The excavations, which have been continuing for nearly three years, shed light on the history of Kadıköy from the 5th century BC to the early era of the Turkish Republic.