Mass shootings in the United States 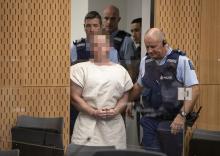 Australian Brenton Harrison Tarrant, 28, a suspected white supremacist, was charged with murder on March 16 after 49 people were killed and dozens wounded in mass shootings at two New Zealand mosques.

A young man died in the Tzaneio Hospital in Piraeus in the early hours of Tuesday after being shot in the chest near the port, police said.

Investigators believe that the man may have been shot following an altercation at a nightclub in the area. He was transferred to the hospital shortly after 4 a.m. following the shooting on Kolokotroni Street and later died of his injuries.

A gunman faces 29 charges of violent crimes after opening fire during a baby-naming ceremony at a Pittsburgh synagogue on Saturday, killing 11 people and injuring six in the deadliest anti-Semitic attack in recent US history, reports AFP.

A 27-year-old man has been arrested for shooting and killing a dog after it entered a field belonging to his 79-year-old employer in the rural area of Varda in Ileia, southern Greece.

According to reports, the perpetrator, a foreign national, used a hunting rifle belonging to the 79-year-old who had allegedly ordered him to shoot on sight any animal that entered his fields.

Syrian citizen shot with a gas pistol at people in downtown Sofia. There are no data for victims yet.

The shooter was in a car together with two other compatriots. He told police officers he was shooting in the air because of people who passed near the car.

Bakersfield. A man went on a shooting rampage in Bakersfield, California, killing five people including his wife, before taking his own life, a police spokesman told AFP.

A gunman opened fire Sunday at an online video game tournament that was being livestreamed from a Florida mall, killing multiple people and sending many others to hospitals, authorities said.

Meredith) - Five people are dead after a shooting occurred at a nursing home in Texas Friday night.

(CNN)A woman was killed and 13 others injured in a shooting in Toronto on Sunday night, Police Chief Mark Saunders said.

A man firing a handgun into restaurants and cafes as he walked along a Toronto street shot 14 people, killing one of them, before dying after an exchange of gunfire with police late Sunday, police said.

Police Chief Mark Saunders said the shooting in the city's Greektown neighborhood was not random and he did not rule out terrorism as a motive.