Africa is facing an explosion of preventable diseases due to delays in vaccinating children, the World Health Organization (WHO) said on April 28, with measles cases jumping 400 percent.

Twenty African countries reported measles outbreaks in the first quarter of this year, eight more than in the first three months of 2021.

"The decline in COVID-19 cases is steady but the rate of decline is slowing. It is very likely that new mutations will emerge in the autumn to winter period of 2022, leading to a new variant that will increase morbidity. Probably the wave will be milder but there will be more infected people," said on Nova TV Prof.

China has confirmed the first known human case of the H3N8 strain of avian flu, but health authorities say there is a low risk of widespread transmission among people.

H3N8 is known to have been circulating since 2002 after first emerging in North American waterfowl. It is known to infect horses, dogs and seals, but has not previously been detected in humans.

The medical community around the world is on alert after the outbreak of acute hepatitis cases in children in various countries.

The most worrying thing of all, is the fact that some of the children who got sick (about 10%) needed a liver transplant, a development that shows the severity of the condition.

Ljubljana – One child in Slovenia is suspected of having fallen ill with hepatitis of unknown origin, Mojca Matičič, an infectologist at UKC Ljubljana hospital, told the press on Monday. Further test results are yet to come in, but the child’s condition is good.

Ljubljana – The number of patients in hospital with Covid has risen slightly despite the continued decrease in the number of new cases, which were down 18% over the week before to 328 on Sunday. The number of those hospitalised with Covid as their primary or secondary condition rose by nine to 230, whereas the number of ICU cases dropped by three to 30.

Estimates concerning acute hepatitis in children are particularly worrying, especially for the age group of 5-17.

Ljubljana – A total of 489 new coronavirus cases were recorded in Slovenia on Saturday in what is a continuation of a week-on-week drop in cases. According to the Health Ministry, 221 patients with Covid as their primary or secondary condition are hospitalised, up three from the day before, including 33 in intensive care, five more. Two patients died. 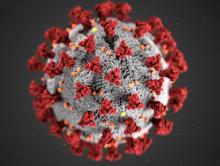 Ljubljana – Slovenia logged 1,154 coronavirus cases on Thursday, a decline of 14% from the same day a week ago. One patient with Covid-19 died, the Health Ministry reported. The overall number of patients with Covid-19 in hospitals stood at 240 this morning, down by five. 29 still require intensive care, of which only 17 are treated for Covid as their primary condition.

Epidemiological data released today indicate that the COVID-19 epidemic in Greece is winding down at a steady pace.

The National Public Health Organisation announced the death of 43 COVID-19 patients and 6,755 infections confirmed in the last 24 hours.