Populations of the lagocephalus sceleratus, commonly known as the silver-cheeked toadfish, which in recent years have spread across the Aegean and the Mediterranean, could lead to death if consumed, according to marine biologists.

The fish, described as a "highly toxic invasive fish," entered the Mediterranean from the Indian Ocean via the Suez Canal.

Comments last week by Acting US Defense Secretary Patrick Shanahan, who drew parallels between Moscow's "unsafe and unprofessional" behavior following the near-collision between US and Russian warships in the Philippine Sea and Turkey's moves in the Eastern Mediterranean, pointed to something much more profound and significant than the usual occasional statements.

With concerns rising about a possible "incident" in the Eastern Mediterranean or Aegean, Ankara appears to be stepping up its efforts to entrench its presence in the region.

The drillship Fatih is already in Cyprus's exclusive economic zone (EEZ) and Turkish authorities have indicated that a second vessel, the Yavuz, will also be dispatched to the region in due course.

Greek and Dutch divers have removed two tons of discarded plastic fishing nets from the seabed in northern Greece, where they posed a risk to local marine life, including a rare endangered species of Mediterranean seahorse.

At least 50 migrants drowned on May 10 when their boat capsized in the Mediterranean Sea off the Tunisian coast after they had left Libya hoping to reach Europe, the United Nations migration agency said.

A new project uniting six Mediterranean countries is working to save endangered populations of sea turtles from the combined threats of tourism, pollution and fishing.

A ship is barely visible from the Acropolis hill on Wednesday as Athens - and much of the rest of Greece - was blanketed in Saharan dust and sand blown on the wind from Libya. The worst affected areas were in central and western Greece, the Peloponnese and Crete. High dust concentrations are also expected on Thursday and Friday before the weather starts to clear on Saturday.

The "Eastern Mediterranean Security and Energy Partnership Act" submitted to the US Congress by Senators Robert Menendez and Marco Rubio that essentially upgrades the geopolitical roles of Greece and Cyprus is seen in Athens as a reflection of Washington's renewed interest and growing involvement in the region. 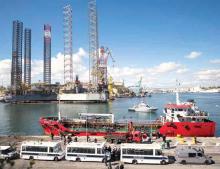 The captain of a Turkish oil tanker hijacked in the Mediterranean Sea off Libya's coast on March 27 has said a European naval aircraft that initially requested the ship to rescue migrants has failed to keep its promise to take the migrants back.