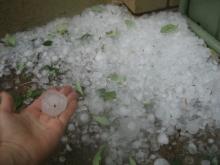 One person died in a city park after hailstones, some the size of golf balls, blasted Sofia, Bulgaria, on Tuesday.

Parts of the capital were left without electricity as a result of the storm and even mobile phone communication was disrupted for several minutes. 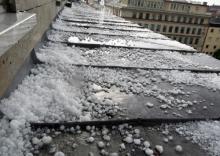 A day after a devastating hailstorm hit Sofia, the government has decided to allocate additional BGN 3.4M to the Ministry of Agriculture, BGN 1.2M of which is for anti-hail missiles.

A tree crushed a man in the Borisova Gradina park in Sofia during the heavy storm with hailstorm and high winds, which hit the city on Tuesday afternoon, report the media.

According to the police, the victim is seemingly around 70 years old.

The National Weather Forecaster has on Thursday issued a Code Yellow warning of downpours and storms for 20 counties to stay in place from 6 p.m. on Thursday till 6 a.m. on Friday.

Showers and thunderstorms are expected to hit Central and Eastern Macedonia, the islands of the Sporades and northern Evia late on Friday and on Saturday, the Hellenic National Meteorological Service (HNMS) said on Friday.

Rainfall in July would be a bit over the normal values, said Krasimir Stoev of the National Institute for Metorology and Hydrology.

The average rainfall in July is between 40 and 60 liters per square meter.

The harvest season in Bulgaria could be delayed as a result of the intensive rains and floods in the country.

“Up to 250,000 decares of wheat have been destroyed by the rains and it could take at least a week longer than usual for the machines to go in and collect the harvest”, Agriculture Minister Dimitar Grekov said, quoted by Investor.bg.

After a thunderstorm has hit Bulgaria's Dobrich today, the situation remains critical and the town is still in a state of emergency.

Many of the settlements in the area were left without electricity and water. There are broken water mains, pumping stations and power substations have been flooded, BGNES reports.

A powerful, non-supercell tornado over water has caused damage after it hit the eastern shores of Istanbul on June 19.

The tornado, a rare occurrence for northwestern Turkey, was first seen over the Marmara Sea before passing through the Pendik and Tuzla neighborhoods in eastern Istanbul and reached the province of Kocaeli.

As previously reported, on Thursday afternoon the city was hit by severe rains and thunderstorms, which caused floods, death and damages. The district of Asparuhovo was hit by a flash flood from the ridge above the area.