Two people were killed and over 20 others were injured in a mass shooting in Miami early Sunday, police said.

Three people got out of an SUV and "began shooting indiscriminately into the crowd" of people who were standing outside a "scheduled event" at an establishment on 186th Street, in the Hialeah area west of Miami Gardens, Miami-Dade police said in a statement.

Police now stand guard around a replacement banana artwork valued at tens of thousands of dollars after the original was eaten off the wall at an art gallery in Miami, Florida, reported local media. 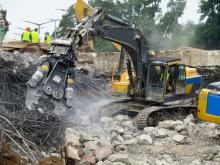 A pedestrian walkway that was still under construction collapsed onto a busy highway in Miami on Thursday, killing at least four people.

Ekaterina Juskowski was filming her friend on a Miami beach when a group of illegal migrants jumped from a ship and ran to the beach for safety. US Border Patrol Spokesman Frank Miller said that the video was “testament to how confident” immigrants are in entering the United States.