U.S. Secretary of State Mike Pompeo cancelled his Europe trip at the last minute on Tuesday after Luxembourg's foreign minister and top European Union officials declined to meet with him, European and U.S. diplomats familiar with the matter said.

U.S. intelligence and law enforcement agencies said on Jan. 5 that Russia was probably behind the massive SolarWinds hack that has shaken government and corporate security, contradicting President Donald Trump, who had suggested China could be to blame.

US Secretary of State Mike Pompeo shared a picture of fireworks exploding over the ancient Parthenon temple atop the Acropolis hill during New Year's day celebrations, in a New Year's message on Twitter.

The image, shot by Petros Giannakouris of the Associated Press, was one of four depicting New Year's celebrations around the world. 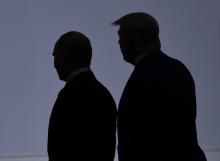 President Donald Trump on Dec. 19 downplayed a massive cyberattack on U.S. government agencies, declaring it "under control" and undercutting the assessment by his own administration that Russia was to blame.

American sanctions imposed on Turkey for its purchase of the Russian-made S-400 missile defense system do not aim to undermine the military capability of its NATO ally, US Secretary of State Mike Pompeo has reportedly told his Turkish counterpart Mevlut Cavusoglu.

Top U.S. diplomat Mike Pompeo has assured his Turkish counterpart that American sanctions imposed on Ankara for its acquisition of a Russian missile defense system were not intended to weaken the country's military capabilities.

The US Secretary of State Mike Pompeo accused Russia on Tuesday of trying to destabilize the Mediterranean, pointing to a series of actions in countries that include Greece and Cyprus.

The US Secretary of State Mike Pompeo said on Monday the United States has made clear to Turkey that its purchase of Russian S-400 missile defense systems would endanger the security of US military technology and personnel.

Pompeo said he has urged Turkey to resolve the S-400 issue in co-ordination with the United States.

Turkish authorities on Friday issued a navigational for firing exercises in the Mediterranean, in an area between the Greek islands of Rhodes and Kastellorizo.

The Navtex reserves the area for December 9 and 10, which will coincide with a European Council summit on December 10 and 11 during which possible sanctions against Ankara will be discussed.