The contract was signed with a Russian company which will deliver the first two repaired engines by April 30, 2017. Two engines are to be delivered to Bulgaria every month afterwards until all have been received.

Ukraine supports the investigation launched in Croatia into the overhaul of a number of its MiG-21 jets in Ukraine.

The Croatian military police are carrying out "a big investigation" concerning a deal that saw the country buy and overhaul MiG-21 jets in Ukraine.

Zagreb-based Jutarnji List daily writes that "many irregularities" have been uncovered so far, while there is "serious suspicion" that "someone received bribes." 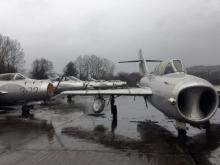 The Albanian Defence Ministry has postponed an auction of old Russian and Chinese-made military planes following an unexpectedly large number of requests to take part in the bidding.

Earlier this month, the ministry put out a routine announcement of an auction on February 22 to sell 36 planes and four helicopters parked in military aerodromes.

Bulgaria will amend its legislation to allow military aircraft of other NATO member states to conduct policing of the country's air space jointly with the Bulgarian Air Force, the Defence Ministry has announced.

Repair works on the MiG fighter jets that are currently part of Bulgaria's aircraft fleet are quite expensive to repair, Defense Minister Nikolay Nenchev asserted Friday answering to a question in Parliament.

Bulgaria and Romania will begin a joint air policing exercise this month to practice measures against potential threat to strategic facilities from hijacked or suspicious aircraft.

A dozen US Air Force F-15s and some 180 personnel have been deployed at Bulgaria’s Graf Ignatievo Air Base to take part in a bilateral exercise with the Bulgarian Air Force.

The two-week training exercise codenamed Thracian Eagle 2014 comes at a time when US’ Eastern European partners and allies are concerned about rising tensions between Russia and Ukraine.