Greek Prime Minister Antonis Samaras and Turkish Premier Ahmet Davutoglu are expected to issue a joint statement on Saturday, at the end of the latters two-day visit to Athens, following what appears to have been a productive day of talks on Friday.

Ankara and Athens are of the same mind about the importance of Cypriot negotiations' continuing, Turkish and Greek top diplomats say, though they maintain their opposing views for a solution of the ongoing gas dispute.

Foreign Minister Evangelos Venizelos arrived in Ankara Friday night for two days of talks. Ahead of his visit he sought to make it clear that Greece is prepared to discuss maritime issues with Turkey regardless of its recent agreement with Cyprus and Egypt.

Turkish Cypriot President Derviş Eroğlu has thrown his hat into the ring by announcing that he will run as an independent candidate in the country's presidential election to be held in April 2015.

Eroğlu, who was previously elected as the Turkish Cypriot leader in 2010, became the first to announce his candidacy via a statement on Nov. 28. 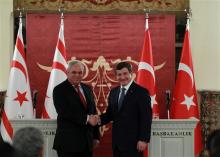 Turkish Prime Minister Ahmet DavutoÄlu has called for the formation of a âjoint committeeâ between the Turkish and Greek Cypriots to resolve the controversy over the use of energy resources off of Cyprus.

Turkeyâs Foreign Minister MevlÃ¼t ÃavuÅoÄlu has proposed a yet-to-be-founded private company continues oil and gas drilling activities in the Mediterranean until a resolution can be found for the decades-long Cyprus issue.

Turkish Foreign Minister MevlÃ¼t ÃavuÅoÄlu has stated that he has proposed the engagement of a to-be-founded private company in drilling activity until a resolution is found to the decades-long Cyprus issue.

The prospects for the resumption of stalled peace talks on Cyprus and the issue of energy security were among the matters discussed on Saturday by US Vice President Joe Biden and Turkish government officials during a visit by the former to Istanbul. 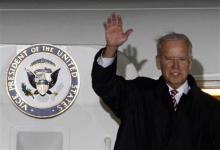 U.S. Vice President Joe Biden has reportedly called Greek Cypriot President Nicos Anastasiades to ask if he wants him to convey any messages to Ankara ahead of his visit three-day visit to Turkey.

Foreign Minister Evangelos Venizelos chaired a meeting of ministers Wednesday in preparation for the Greek-Turkish High-Level Cooperation Council, which is due to take place in Athens on December 5 and 6, and advised them that the upcoming talks would focus on high politics,