Turkish foreign minister on June 11 said Istanbul's Hagia Sophia is "not a matter of international affairs, but a matter of national sovereignty."

Speaking in a televised interview, Mevlüt Çavuşoğlu responded to the recent discussions over the possible reopening of Hagia Sophia as a mosque and said the popular site was initially a mosque after conquering of Istanbul.

As Turkish nationals crawl out of weeks of stay-at-home orders amid the country's normalization phase, mass prayers in mosques across Turkey will begin with the Friday prayer that will be held on May 28.

The country's iconic mosques are about to complete their final preparations for mass prayers that will begin after a two-and-a-half-month break.

Plates in the domes of the 432-year historical Kılıç Ali Pasha Mosque in Istanbul's Beyoğlu district, designed by the famous Ottoman architect Mimar Sinan, have been stolen by thieves.
Taking advantage of the lockdown in the late hours of April 27, the suspects removed the plates on the domes and fled from the scene by loading the plates onto a car they brought with them.

Bosnia and Herzegovina's historic Mostar Bridge was illuminated with the colors of the Turkish flag late on April 21 to mark the 100th anniversary of the establishment of Turkey's parliament.
"The Grand National Assembly of the Republic of Turkey marks its 100th anniversary. We are celebrating with joy," the Turkish Consulate General in Mostar said in a statement.

Inverted tulips that grow in the mountainous regions of Anatolia in the spring have started to blossom on Mount Sakız on the border of the southeastern and eastern provinces of Diyarbakır and Elazığ.

With the arrival of spring, the orange, red and yellows tulips are out in all their glory and have added color to the ever-increasing vivid landscape. 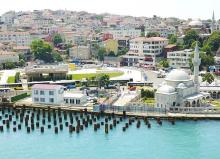 Works have commenced for the remaining part of the Üsküdar Square Expansion Project, which was stopped three years ago when cracks occurred on the walls of the Şemsi Ahmet Paşa Mosque in Istanbul's Üsküdar district, built in 1580 by the prominent Ottoman architect Mimar Sinan. 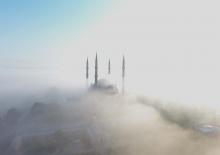 An aerial view of northwestern Edirne province shows clouds and fog drifting around the famous Selimiye Mosque, on Oct. 2.

The Grafist 22: Istanbul Graphic Design Days, organized by the Mimar Sinan Fine Arts University's graphic design department, will take place from April 11 to May 11 at the university's campus in the Fındıklı neighborhood of Istanbul.

Ruins of a church dating back 800 years have been unearthed at the ancient city of Adramytteion in the northwestern Turkish province of Balıkesir's Burhaniye district.

The find comes just two weeks before the end of this year's seasonal works.