World famous singer, songwriter and activist Bob Geldof has said he finds it difficult to understand why the Turkish government did not support the film "Winter Sleep," which won the Palm d'Or award at the Cannes Film Festival this year.

A doctor who recently returned to New York from treating Ebola patients in Guinea tested positive on Oct. 23 for the deadly virus, the first confirmed case in the city, officials said.

The 33-year-old -- identified by US media as Craig Spencer -- has been placed in isolation, in what is the fourth case of Ebola diagnosed in the United States and the first outside Texas.

A doctor who had worked in West Africa has tested positive for Ebola at New York City hospital on 23 October. 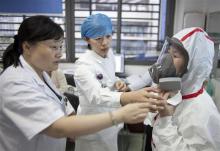 The European Union put up 24.4 million euros Thursday in a "race against time" to find Ebola vaccines and treatments as deaths from the disease mount in the worst affected countries.

The United States ratcheted up its safeguards against Ebola on Oct. 21, requiring travelers from three countries at the center of an epidemic in West Africa to fly into one of five major airports conducting enhanced screening for the virus.

BELGRADE - Serbia is implementing all the available measures against Ebola that are in line with relevant recommendations by the World Health Organization, Bojana Grgic, epidemiologist at the "Batut" Institute, said Tuesday.

Greek health authorities and facilities are preparing for the possibility of an Ebola outbreak in the country, with experts from the Center for Disease Control and Prevention (KEELPNO) constantly updating their directives.

Nigeria - Africa's most populous country - was declared Ebola-free on Monday as European Union foreign ministers thrashed out measures to help halt the spread of the deadly disease.

A Spanish nurse who became the first person outside Africa to be infected with Ebola on Oct. 19 tested negative for the virus, Madrid said