But Vanja Calovic-Markovic, head of the anti-corruption NGO MANS, said the results so far were underwhelming.

Almost thirteen years after airing of TV show Insajder (Insider) on television B92, in which the son of former district attorney in Belgrade Milovan Bozovic was mentioned, Supreme Court of Cassation in Belgrade had judged in favor of Brankica Stankovi and VeranMmati, who were legally represented in the process by Kruna Savovi, partner in ivkovi Samardi law office. 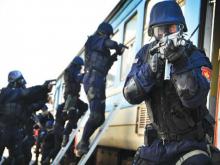 Montenegrin police have launched night-time patrols, raids and security checks on the streets of Podgorica after a series of car bombs and attempted murders in the capital as a result of clashes between rival drug gangs.


BELGRADE -- Dragoslav Kosmajac, 66, suspected of being "one of the biggest drug lords in the Balkans," was arrested by the Serbian police Sunday in a raid in Belgrade....

Two Greek men aged 45 and 48, as well as a 50-year-old Albanian man have been arrested in Athens and Volos on suspicion of being part of a drug-trafficking ring.

The men were found in possession of 13.8 kilos of heroin, which they are believed to have smuggled from Turkey.

PODGORICA - Just hours after being identified by Serbian Prime Minister Aleksandar Vucic as Serbia's biggest drug dealer, Dragoslav Kosmajac, 61, crossed into Montenegro at the Rance border crossing in the night between Friday and Saturday after leaving Serbia at the Jabuka crossing, the Podgorica Vijesti daily reports.

"Biggest drug dealer" is in Montenegro "as tourist" - report