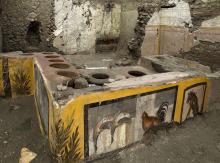 A 2,000-year-old fast-food stall unearthed from the ash of Pompeii has given researchers new clues about the snacking habits of the ancient Romans.

The ornate snack bar counter, decorated with polychrome patterns and frozen by volcanic ash, was partially exhumed last year but archaeologists extended work on the site to reveal it in its full glory. 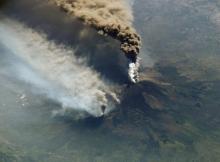 Etna, the word's most active volcano, erupted and threw into the air a pillar of ash 4.5 km high into the sky in Sicily

Volcanologists and seismologists have detected volcanic activity in a crater on the southeastern slope of Mount Etna at night.

The ashes were erupting for three hours.

The volcano is now under surveillance. /vesti.bg

Vivid frescoes and never-before-seen inscriptions were among the treasures unearthed in a massive years-long restoration of the world-famous archaeological site Pompeii that came to a close Feb. 18.

One of the best-preserved Roman houses at Herculaneum reopened on Oct. 23 after more than 30 years, its exquisite paintings brought back to life thanks to a revolutionary new technique. 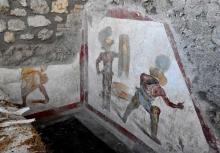 An excavation team was surprised when they discovered a temple in the ancient city of Priene in the western province of Aydın's Söke district. The ancient city is called the "Pompeii of Anatolia" for its unique city plan and well-preserved structures.

Archaeologists have discovered a fresco in an ancient Pompeii residence that portrays the mythological hunter Narcissus, who fell in love with his own reflection.

Archaeologists have unearthed the petrified remains of a harnessed horse and saddle in the stable of an ancient villa in a Pompeii suburb.

The ancient city of Priene, which is dubbed the "Pompeii of Anatolia" due to its unique plan and well-preserved structures in the western province of Aydın, has seen an increase in the number of visitors after being included in the UNESCO Tentative List of World Heritage on June 6.

Ruins of an ancient Roman neighbourhood described as a "little Pompeii", have been discovered on a site intended for social housing in southern France, The Independent reported.

Called an "exceptional discovery" by the French culture ministry, the 7,000sq m (75,000 sq ft) find in Vienne, a small town to the south of Lyon, includes luxury house and public buildings.