Voting began for a crucial state election in India's capital on Feb. 8 with Prime Minister Narendra Modi's Hindu nationalist party trying to regain power after a 22-year gap and major victories in a national vote.

Residents lined up in long queues across New Delhi neighborhoods, where a total of 14.6 million voters are registered to cast ballots.

India is already able to defeat Pakistan in less than 10 days in every new war with its rival, Prime Minister Narendra Modi said, AFP reported.

The neighbouring country's nuclear-weapon nations have fought three wars and last February came close to a fourth with tit-for-tat airstrikes sparked by an attack on Indian troops in Kashmir.

India on Jan. 26 showcased its military strength at an event marking the country's 71st Republic Day.

Hundreds of thousands of workers affiliated to trade unions led a strike in parts of India on Jan. 8, disrupting transport and banking services in a protest against privatisation and the growing impact of an economic slowdown on jobs.

Violent protests against India's citizenship law that excludes Muslim immigrants swept the country over the weekend despite the government's ban on public assembly and suspension of internet services in many parts, raising the nationwide death toll to 23, police said.

Thousands of people joined fresh rallies against a contentious citizenship law in India on Dec. 21, with 20 killed so far in the unrest.

The death toll jumped after demonstrations turned violent on Dec. 20 in the most populous state of Uttar Pradesh, leaving at least 11 dead including an eight-year-old boy, who was trampled. 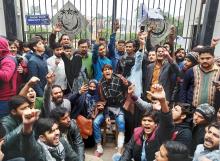 Protests over a new citizenship law based on religion spread to student campuses across India on Dec. 16 as critics said Prime Minister Narendra Modi's government was pushing a partisan agenda in conflict with India's founding as a secular republic.

Indian Prime Minister Narendra Modi promised to unite the country on May 23 after a huge election win, with his party on course to increase its majority on a mandate of pursuing business-friendly policies and a hard line on national security.